The Coglia ultramafic complex covers an 11.5 kilometre by 1.5 kilometre area and is part of a 100 kilometre-long trend of ultramafic rock running from Diorite Hill in the north to Mulga Tank in the south. At Coglia Well, approximately 2.5 kilometres of the 11.5 kilometres of strike have been partially drill tested, resulting in the identification of extensive cobalt and nickel mineralisation.

Historic drilling had been undertaken on wide spaced lines generally 650 metres apart with holes spaced at 320-metre intervals. The 2018 drilling program has infilled this to 160 metre hole spacing. Cobalt and nickel mineralisation occurs on all lines between 30 and 80 metres depth. Mineralisation has developed in the regolith profile above a weathered ultramafic unit which was originally a dunite (an olivine rich ultramafic rock).

Mineralisation is open along strike in both directions. Drilling in 2018 has extended the mineralisation to approximately 4 kilometres long

The cobalt grade appears to increase substantially to the south of the main mineralisation, which is consistent with the grade of Glencore PLC’s adjacent Irwin Hills cobalt and nickel deposits which contain 29Mt at 0.11% cobalt and 1% nickel.

WCN drilled a single RC hole, MERC005, 2.5 kilometres south of the main mineralisation, encountered 28 metres at 0.12% cobalt and 0.55% nickel. There is a further 7 kilometres of untested prospective ultramafic rock to the tenement boundary adjacent to Glencore’s deposit.

While White Cliff has not yet calculated any mineral resources, however it is clear that potential exists for a substantial resource. Historic drilling has only tested a small fraction of the mapped ultramafic unit indicating there is potential to locate significant additional mineralisation. 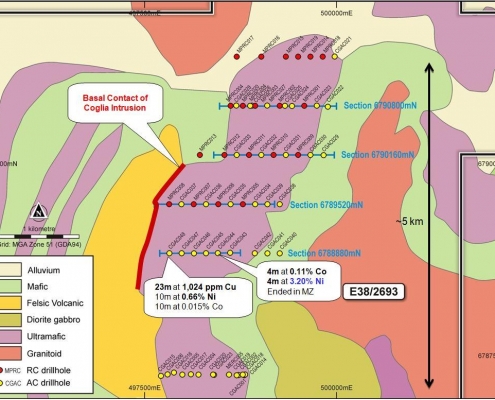 Plan of Coglia Well completed drilling draped over the geology 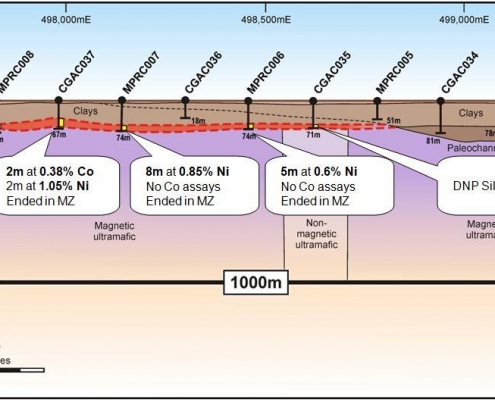 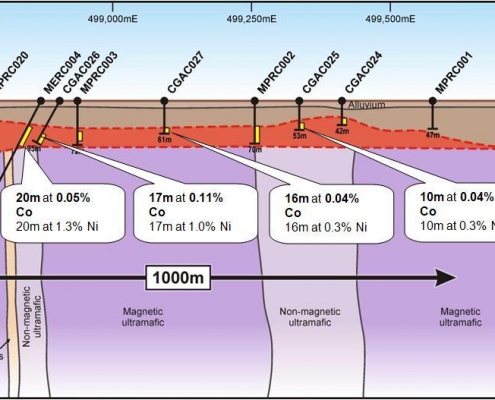 Cobalt mineralisation occurs as a flat sub-horizontal layer in the regolith profile slightly above and overlapping with nickel mineralisation approximately 16-20 metres thick and 30-60 metres below the surface.

Drilling also intersected significant copper mineralisation including; 23 metres at 1,024ppm copper in CGAC048 and 33 metres at 527ppm copper in CGAC047. Copper mineralisation tends to concentrate in the regolith profile at the top of the water table; however, the grades encountered are highly anomalous and may be associated with a sulphide source. 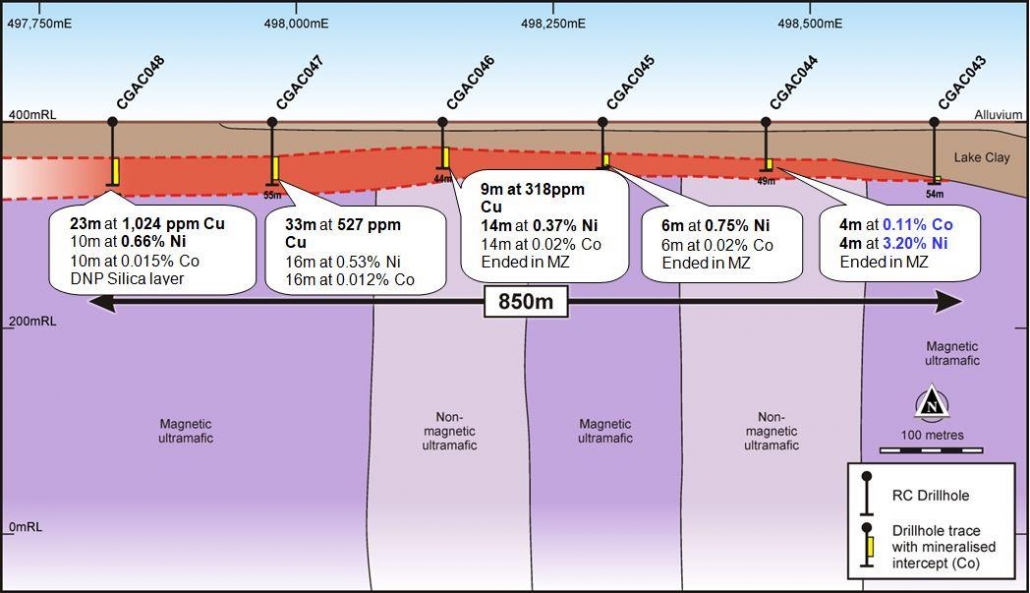