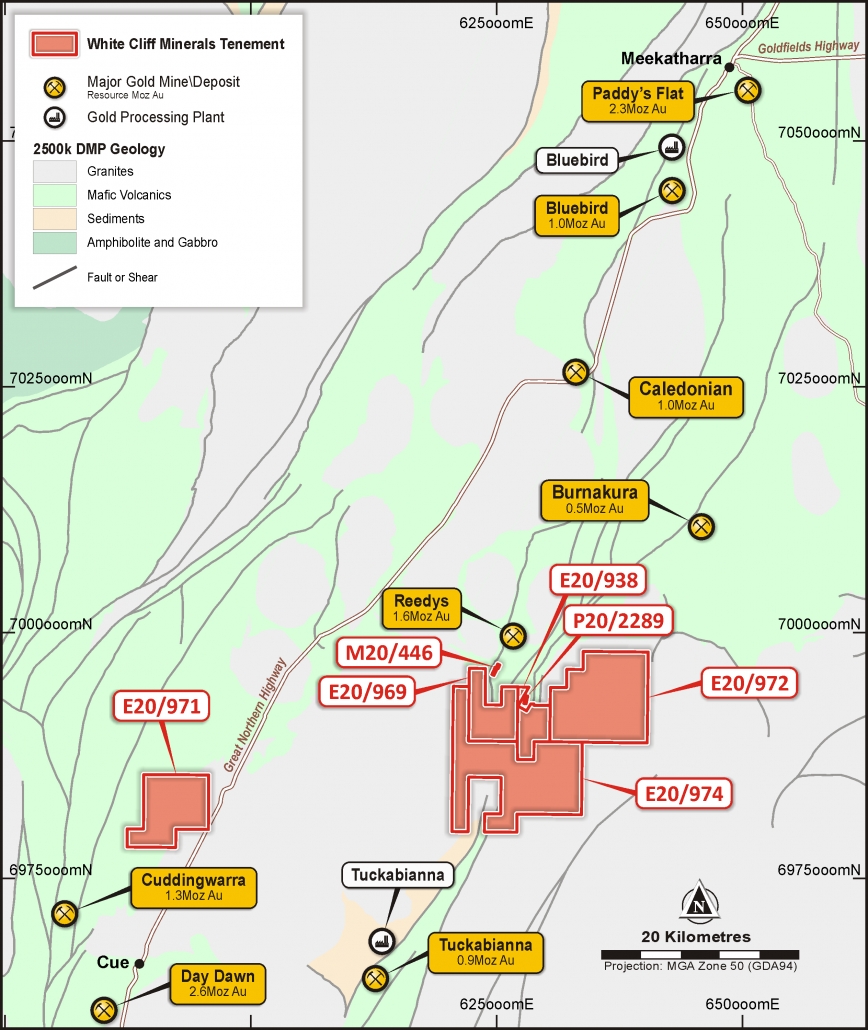 The Project covers 272km2 of the highly prospective Cue goldfields, centred on the southern portion of the prolific Reedy Shear Zone, within the Meekatharra-Wydgee greenstone belt. The Project comprises one granted mining lease (M20/446) covering the historic underground workings of Pegasus and King Cole, a granted exploration and prospecting license (E20/938 & P20/2289) and four exploration license applications (E20/969, E20/971, E20/972 & E20/974). Reedy South is situated 40km north of Cue, via the Great Northern Highway and is 80km south of Meekatharra..

The Project is situated within the prolific Cue-Meekatharra gold district, home to Reedys (1.6moz) and Day Dawn (2.6moz) gold deposits, with two mills operating within 60km of the Project.

There were two underground workings at M20/446, accessed via the Pegasus and King Cole shafts, however there is no official gold production recorded from the historical underground production. An RC drilling program undertaken in 2015 by the project owner focused on the Pegasus prospect consisting of 42 holes for 1,820m.

On 29 October 2020, the Company announced a maiden JORC mineral resource estimate (MRE) for the Reedy South Gold Project. The maiden MRE consisted of 779,000 tonnes at 1.7 g/t Au for 42,400 ounces, including:
o 6,600 ounces of Indicated Resources; and
o 35,800 ounces of Inferred Resources
Given the average depth of drilling to date is ~60m, this warrants immediate drilling to test depth and strike extensions of the current prospects on completion of the maiden MRE.

Key companies which have managed the tenement since 1984 include Homestake Australia Ltd, St Barbara Mines Ltd and Wakeford Holdings PL. The majority of drill holes (Table 2) have been RAB and RC by Homestake and St Barbara, exploring for gold. The tenement has been held in private hands since.

The holes were designed to define the footwall and hanging wall contacts on both sides of the shear zone which averaged 20m in true width. The drilling confirmed the historic high grades associated with the Pegasus deposit, but did not test mineralisation below 60 metres.

The Reedy gold deposits occur within a north-south trending greenstone belt, two to five km wide, composed of volcano-sedimentary sequences and separated multiphase pre to syn-tectonic granitoid complexes. Structurally controlled, the gold occurs at the sheared contacts of dolerite, basalt, ultramafic schist, quartz-feldspar porphyry and shale. The Reedy gold deposits occur within a major lineaments or structural corridors that corresponds to the RSZ along which gold mineralisation extends over 15km.

The RSZ zone is located on the western side of the Culculli Granitoid complex. Mineralisation along the RSZ has long been recognised as the most economically important. Two main mining centres are located along the RSZ: a northern centre including the Kurara and the Boomerang deposits and a southern centre hosting mineralisation at Jack Ryan, Missing Link, Rand, Triton and South Emu. The Reedy South Gold Project area is approximately 600m south of the Triton-South Emu Mine currently in operation for Westgold. 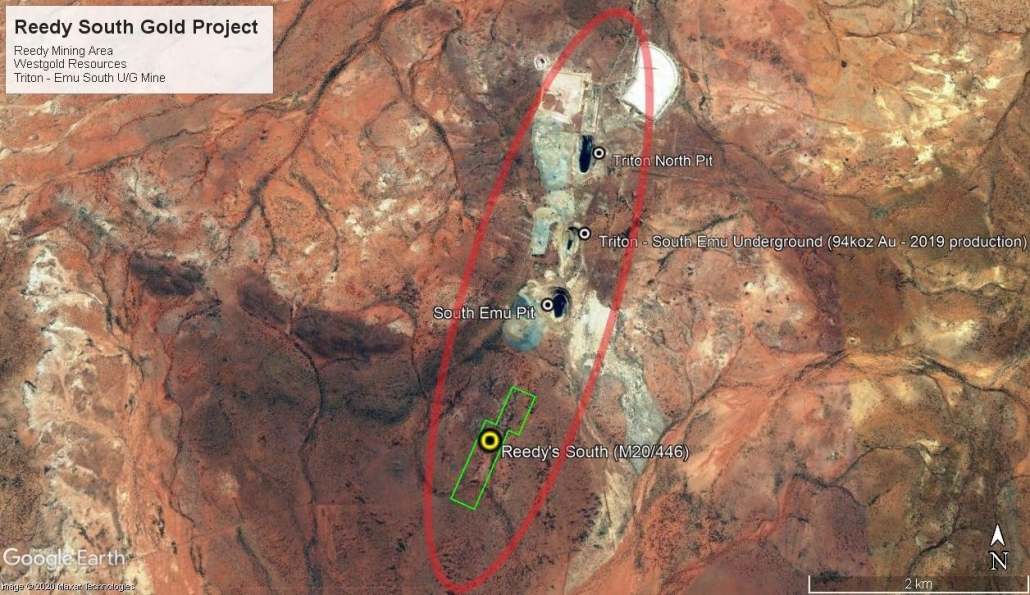 Figure 2. Location of tenement M20/446 in relation to South Emu/Triton and showing the RSZ trend 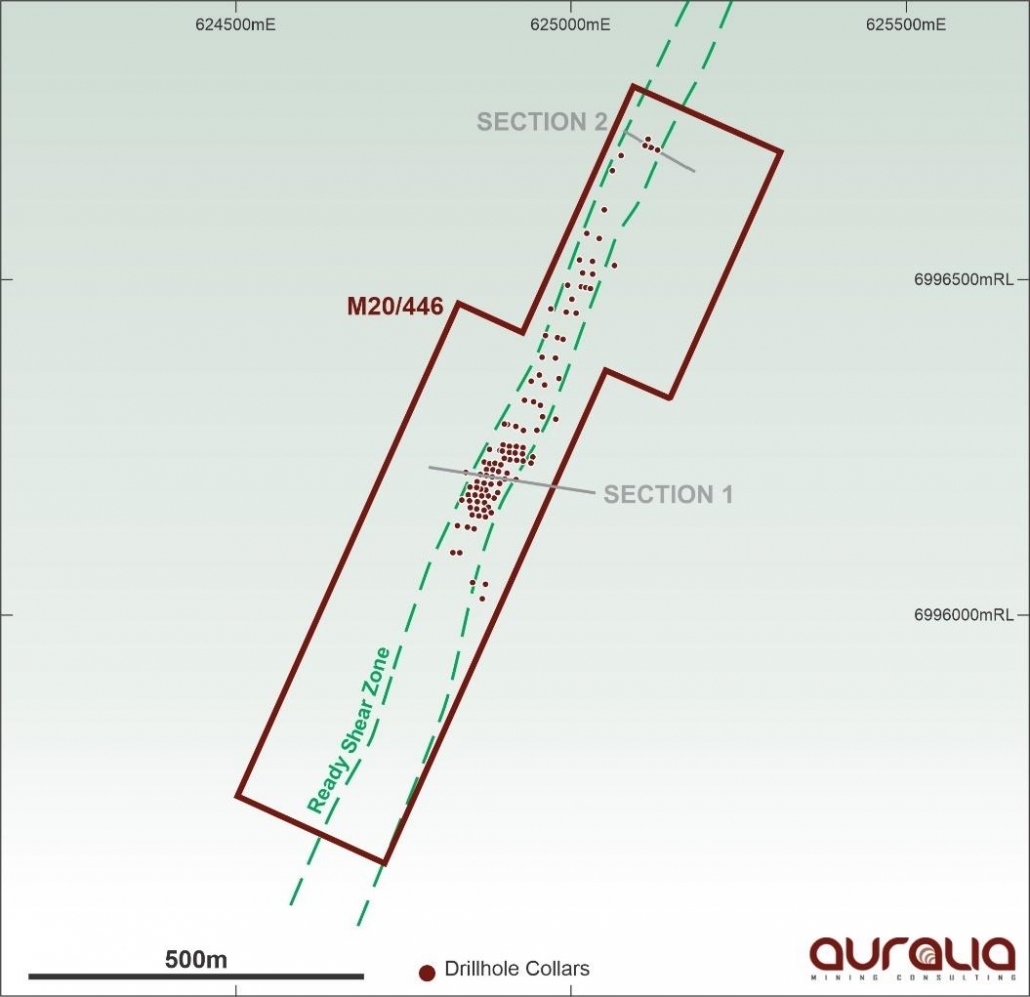 On 29 October 2020, the Company announced a maiden JORC mineral resource estimate (MRE) for the Reedy South Gold Project.  The MRE will feed into the design of the Company’s first pass drilling program at the Pegasus and King Cole prospects, which will consist of an initial ~2,000m of RC drilling (with potential diamond tails). Concurrently, with the drilling program, the Company’s geologists will conduct an initial geological mapping program across E20/969, E 20/971, E 20/972 and E 20/974.