The project is surrounded by world class mining infrastructure and multiple operating mines. Glencore is currently mining cobalt and nickel from the Murrin East open pit which contained an initial resource of 66 million tonnes at 1.1% nickel and 0.09% Cobalt.

The Coronation Dam project area covers 16km2 and contains an outcropping ultramafic unit that is approximately 1 kilometre wide and 5.7 kilometres long within the tenement.

Cobalt mineralisation occurs in several places, starts at surface and extends up to a depth of 50 metres. The mineralisation has developed in the regolith profile above an intensely weathered ultramafic unit which was originally a peridotite.

The main zone of mineralisation extends over 1.4 km north-south and 750 metres east-west.  The vertical thickness of mineralisation ranges from several metres to a maximum of 70 metres.  Mineralisation starts at surface and dips shallowly to the west.  The bulk of the higher-grade mineralisation is concentrated within the centre of the deposit (see figures 2 to 6 showing depth slices of the nickel mineralisation).  The deposit has only been shallowly drilled in most areas and remains open along strike and at depth.

The Company will conduct preliminary metallurgical test work on the existing drill samples including beneficiation and leaching prior to considering additional drilling.  Provided the test work is positive the Company will consider a small drilling programme aimed at converting the Inferred Mineral Resources to Indicated Mineral Resources.  This drilling would target the shallow, higher-grade central area of the deposit and investigate the potential for open pit mining. 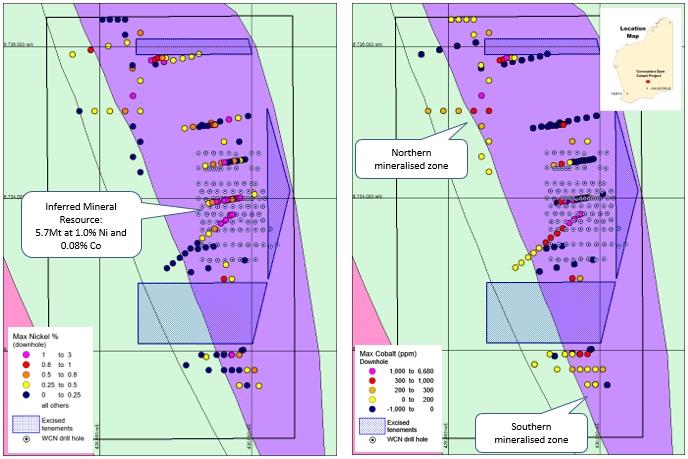